Banana pistachio coconut ice cream- for that Friyay feeling. Scoop mixture into a large bowl and add most of the toasted coconut, and all of the pistachios. The bananas will eventually form an airy ice cream-like whip. Top cookie with banana ice cream and enjoy! 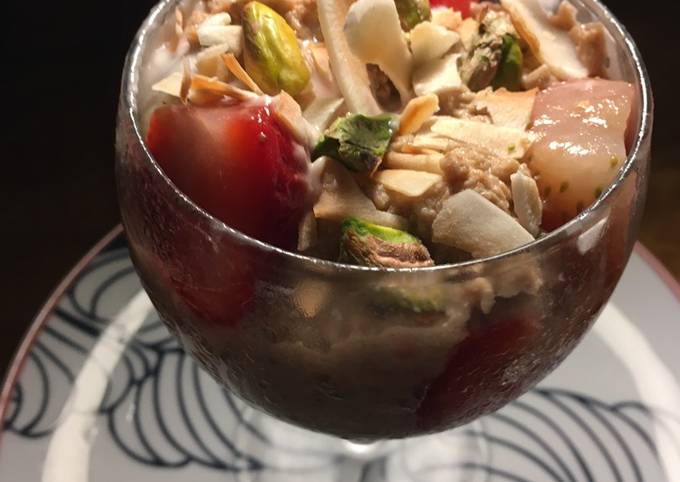 Freeze for at least four hours. The base of this recipe is the same as our simple vegan coconut ice cream with some ground pistachios blended in. You start off with a mix of coconut milk, coconut cream, sugar and syrup and heat that on the stove until it reaches a simmer. You can cook Banana pistachio coconut ice cream- for that Friyay feeling using 0 ingredients and 4 steps. Here is how you cook that.

Add the bananas and salt, and continue to cook, stirring occasionally, until the bananas are soft and completely cooked through. Tastes just as good or better as the real thing. Also so simple that it is barely a recipe. Serve this ice cream for breakfast for anyone who is skeptical about raw foods, and subsequently ask them what other way they could eat ice cream for breakfast and not feel guilty.

For the ice cream: add the frozen banana to a food processor. Process on high until smooth and creamy, scraping down the sides as needed. Add vanilla and process until combined. Taste, and add a little sweetener of choice if it's needed (depending on your tastebuds and the ripeness of your bananas). Peel bananas, slice them and freeze them.